I recently sat down with Mitch Gelman, Chief Technology Officer of the Newseum in Washington D.C. That’s right – CTO of a museum. Gelman has a background in media technology and production, and explores how advanced technology, such as Virtual and Augmented Reality, will create the next era storytelling. 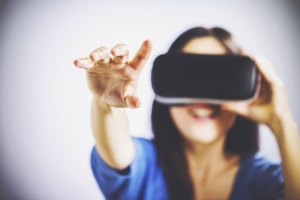 To start, would you tell me a bit about your background and how you got your start in this emerging field?

I started as a reporter at a newspaper in New York City, and moved to Seattle to work in digital media in the late 90s. I then went to CNN.com where I ran editorial and operations. I remained interested in the evolution of digital media with user-generated content, mobile apps and Content Management Systems that allow for personalization or ad-targeting. That led to a focus during the last two years on telling stories and monetizing experiences through Virtual Reality (VR) and Augmented Reality (AR).

Could you clarify the differences between what Virtual Reality and Augmented Reality are, and how they are used?

Virtual Reality is when you go into an environment that is completely separate from the one you are in. Augmented Reality is when a virtual scene is brought into your current physical space. For example, in a VR Jurassic Park experience, you would put on a headset and be completely surrounded by dinosaurs in their environment. In an AR experience, you would put on a headset and the dinosaurs and pterodactyls would interact in your current environment, sitting down in your kitchen and flying over your guinea pig cage.

Journalism blends more with VR right now than AR because of where the technology is, but they’ll likely both be used for similar storytelling purposes.

Did you envision this multimedia-rich future when you started out as a reporter?

It seems like a natural progression to me. The media is not what it used to be, which was an end product – a physical magazine, film, radio show. What it has become–and this explains the advent of telecoms and tech companies as media powerhouses–is the intersection of emerging technology and content connects with consumer interest. In order to keep up with these changes, I have tried to adapt my career based on the way people are communicating and absorbing news, information and entertainment.

With this shift from media as an end-product to a consumer interest-driven narrative or experience, do you see the ethics of journalism changing?

When any new form of media emerges, so do new questions around ethics. The fundamental principles are the same, but with AR and VR you have to take new scenarios into consideration. It is harder to screen a 360-degree video than it is to screen a single frame video. Likewise, it is going to be more difficult to monitor hundreds of thousands of Facebook live feeds than it has been to vet a few networks and cable channels with a seven-second delay. And how do you block questionable content when you can’t see it because it is out of the field of view?

Do you see any cultural differences in how VR and AR are being used abroad?

Asia and parts of Europe that have newer telecommunications infrastructure than the US are seeing a rapid increase in adoption. I haven’t seen a difference in the way stories are being told, but where cell phones are more common, the pace of media moves more quickly. VR will also build on video game and e-sports culture.

Culturally, technology can bring people together around shared interests. So, in many ways, we are learning that people have more in common with each other in the 21st century than they might have in the past.

I see that technological and socioeconomic connection deepening already – as a bonus for pre-ordering the new Pixel phone you get a Daydream VR set. Do you think VR sets are going to enter mainstream culture sooner than later?

Yes, and may happen more quickly than people may anticipate. No one can really know when though, and anyone who pretends to know is really just speculating. At the Newseum we built the first VR exhibit of any major public institution, and at the museum’s VR theater and in our VR lab we see hundreds of people experiencing VR storytelling for the first time each day. They are delighted, amazed, and excited by what they’re experiencing.

Is the process of aligning technology and a message different in Virtual or Augmented reality, where the experience seems less linear or narrative? It seems more like Choose Your Own Adventure.

There is a difference in the agency involved; you become a participant in how you are gathering the information. There’s a shift from a linear lecture to a sense of discovery–and by engaging people in that sense of discovery, there’s greater retention and authenticity in what they are experiencing. That will become much more profound as the post-millennial, Minecraft generation enters the consumer world. It’s very interesting speaking to people about the power of these technologies, because people’s intuitive understanding of it is not based on their age or level of technological acumen, it is really based on how much exposure they have–as grandparents, parents, neighbors, teachers–to people between the age of eight and 18 years old. If they are in contact with the younger generations, they understand intuitively the impact and potential of these emerging media.

Here’s to indulging our childlike curiosities! Thanks for spending some time with us, Mitch! To read more about his work and the future of Virtual Reality, check out his co-authored Knight Foundation report on Virtual Reality or check out the Newseum on your next trip to Washington D.C.

About the Author: Josie Keenan

Daughter of a musician, granddaughter of a brewer. Big fan of family and where the creative meets the professional!