Most Interesting Jobs: Behind the Scenes 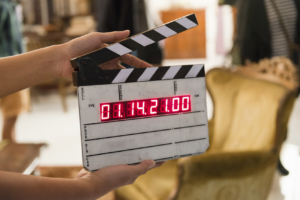 Have you ever seen a little-known film more powerful than a blockbuster production with large studio backing, and wondered how those transformative few hours came to be? Ben Gouldthorpe, a successful independent filmmaker, spent some time with us to share a behind-the-scenes look at screenwriting.

Can you tell me a little about your origin story?

I’m originally from Erie, Pennsylvania. I didn’t go to college right away, though I did well in school and was recognized for being a good writer. It just didn’t sound appealing to me to get in line and do what you’re supposed to do – I had a lot of teen angst to burn off before I could come around to it. But, in high school I had a really good creative writing teacher who focused on unlocking your voice and finding what makes you unique as an author. I guess after a few years that’s what stuck with me and ultimately pushed me toward getting a film degree in Hawaii and my MFA at NYU.

Along the way, I was always less interested in the business side of the industry. I’d started writing during the later stages of punk music, when the last thing you wanted to do is sell out. So for me, the freeing nature of being an artist was the most exciting part of screenwriting. You’re not going down a set career path. You live or die by the choices you make.

It sounds like you were motivated by writing your own story, so to speak. Do you still feel that sense of freedom in your work, or has the grind become its own pressure?

There is a lot of freedom. I don’t have a single boss, and I enjoy a good measure of autonomy in the sense that I choose how to spend my workdays. I’m not sure that I’d be able to say that if I were a lawyer or an engineer.

But there’s also a lot of pressure to perform. When I’m pitching projects or submitting samples, I need to be able to modify my approach on the fly and respond quickly to constraints set up by other people. So it’s not like I float around and do whatever I want. As much as I might have a flexible lifestyle, there’s real stress.

How do you find other artists and teams you want to work with?

It’s true that the business is a lot about who you know. To me, that’s a good thing if I can surround myself with people who have similar energies. That’s why I go to festivals like Sundance–it’s a great way to see what’s fresh and to meet people. If I watch something exciting, I can usually chat with the director and cast members right there. Those quick hellos might be the seeds for lasting connections.

This year at Sundance, I caught a film called Life, Animated–a brilliant documentary about a young man with autism transitioning into adulthood. Because I worked for a while in Hawaii with kids diagnosed along the autism spectrum and have always wanted to explore that world in one of my own films, I stuck around to meet the filmmakers. Several months later when they premiered the film in LA, I had a chance to say hello again and form an even stronger connection.

If you see something that hits a nerve, go and talk to the artists! People are very approachable when it comes to talking about the projects they love.

What do you see as the role of independent films in modern entertainment or culture?
I see it as an opportunity to put something good into the world, and I sometimes think of myself as a culture farmer. Throughout my life, film has helped to shape my character. As an artist, I don’t think that means I should set out to teach people to be better people – that’s presumptuous. But if we put a lens on life and try to present a perspective or give voice to people who have been underrepresented, we can build compassion, tolerance and kindness in our culture. You fight the good fight and hopefully you help the world to be a little more peaceful with the stories that you contribute.

That said, there’s real cynicism in the film industry. Starting out, you think your first script is going to take off and change the world. And that’s not how it happens. I’ve been writing for 10 years. I’m not as naive as I once was, but I’ve stayed in the saddle and developed real appreciation for my craft — not only in what I do as a storyteller and working with other people to tell their stories, but in this feeling that I’ve kept at it.

It’s not an easy industry. There’s tons of rejection and a lot of uncertainty, but there’s also a strange feeling of progress. I don’t always know where I’m going, but I appreciate the fact that I’ve stuck with it for so long and can see my own growth.

What types of projects are the most challenging or fun for you?

During my MFA program at NYU, they cross-trained us in theater, TV and film, and I found out just how painful it could be to develop television pilots. For someone with a background writing 90-120 minute films, wrapping my head around how I’d lay the foundation for what might be a five-season, 60-hour series felt like an enormous puzzle. Thankfully it got easier, and I’ve come to enjoy the challenge.

Having said that, I’d say I’m still most comfortable writing feature films. There’s less that needs to be figured out. A good feature might be the literary equivalent of a short story; quick in, quick out. You can stay focused on one character. Television series are more like a set of novels. To raise them from the ground up, there’s a lot of work that needs to be done just for the pilot. It’s really rewarding, but it requires heavier lifting.

And yet demand continues to rise!

Absolutely. With streaming services that let us binge-watch TV, there’s a huge demand for quality television. It holds an audience in a different way. Viewers tune in at their leisure and don’t have to remember what happened a full week ago, so writers can be more subtle in what they’re crafting and take more risks as storytellers. On the film end, large-budget features are so expensive to produce that the studios often hedge their bets on franchise projects that might lack creative substance but do well overseas. You can’t blame them–if they’re going to invest hundreds of millions of dollars in a movie, they want to do everything they can to ensure that they’ll make their money back and then some. That model can leave little room for medium-budget projects, but now TV has the ability to fill in those gaps with material that’s more subtle, cheaper to produce, and works better for a domestic American audience. Again, this lets TV-makers take more risks.

What upcoming project are you most excited about?

Good question! When I first started writing, I had this fear that I would run out of stuff to write — but it doesn’t work like that. I have entire notebooks of ideas I’d like to turn into films someday. Maybe I’ll get back to those. Probably not.

All that aside, I’d really like to tell a story inspired by the work I did with children diagnosed with autism. It was a special part of my life. I did it in-between my film degrees in my late twenties. When I finished and went to grad school, I couldn’t yet access those stories. I was still too close to them. I needed to let them gestate for a while. My process surrounding all that has been a slow but strong burn. I don’t know when I’ll get around to it, but I need to tell a story inspired by that world and how much I learned from those kids.

I’m curious if your process has changed at all as you’ve moved from renegade to student to successful independent filmmaker.

The process does change. What I do now is different from what I did 10 years ago. That’s been a cool part of learning my craft. Right now when I approach a project, whether it’s someone coming to me as somebody else’s idea or something of my own, I’m a character-driven writer. I’m looking at who the character is, what their primary relationships are, and what they’re going to endure that will affect their internal strife. How would the character process that challenge, and how would that materialize in their world?

I spend a lot of time investigating and getting to know the character, understanding how situations would unfold. When I get on the page, looking at specific scenes, I’m visualizing it as it might happen. Sometimes I’ll see a shot or overhear a piece of dialogue, and there’s something that clicks–there’s a kernel of truth in it, and I stick it in a notebook. I stockpile those images and scraps of dialogue. Some of it gets cut away. Some of it becomes essential to what I’m writing later on. When I get into the scripting and actually building scenes, I have a very clear – sometimes too clear – vision of how I want it to look. That’s a fine line to walk. I often have to remind myself that when I’m writing, I’m not directing. I have to reel myself back in. I think the job of the screenwriter is not to control every detail but to make the right impressions on the page to allow other people to access the story–to help them see why what you wrote is essential and will be compelling to the audience. Then you have to trust other artists to pick up on that texture. I believe you should inspire others to a similar vision, rather than control it all yourself.

These are only a few examples and insights into my process. Altogether, that’s something that’s come a long way since my earliest scripts. And there’s no doubt that it’ll continue to evolve.

Any last words to aspiring screenwriters?

If you want to be a writer, the most important thing to do is to keep writing. Generate content that you care about. Be relentless. Don’t give up. When you stick to it and get further along on your career path, be mindful that you’ll work projects for your wallet and projects for your heart. (Working with branded content can be a great means to support your more “artistic” endeavors.) Whatever you’re writing, always consider your audience. The communion that you’ll share with the people reading or watching your work is the greatest gift the craft can give!

Thank you, Ben, for sharing your time and insights with us!

About the Author: Josie Keenan

Daughter of a musician, granddaughter of a brewer. Big fan of family and where the creative meets the professional!