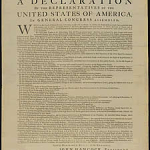 The United States is preparing to celebrate the 238th anniversary of the Declaration of Independence, a document signed by the thirteen American colonies announcing the newly independent sovereign state, the United States of America. Did you know the Declaration of Independence was actually approved on July 2, 1776, but a couple edits were made and the final copy was approved for printing on July 4th which is why, July 4th has become America’s Independence Day. Here are some other facts and figures you may not know about the 4th of July…

Now on to the Fun Stuff!

Besides the USA, who celebrates the 4th of July?

…And now you know!