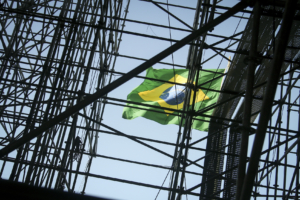 Today Maven launched our first-ever public Virtual Ideation Panel, bringing together leading experts from around the world to debate the challenges of the upcoming 2016 Olympics in Brazil.

Each time the Olympics roll around, there seems to be a race to complete all of the necessary preparations in time – just hosting the Games is an Olympic feat! However, this year’s sprint to the Opening Ceremony is perhaps the most fraught with hurdles the Olympic movement has ever seen. From deep political and economic upheaval to environmental struggles to a burgeoning epidemic, the news is full of disturbing reports from Brazil on the challenges the country faces as it prepares to host the world in August. Are these concerns serious or much ado about nothing? Will Brazil be ready? Will the Games be a success?

Maven has assembled a panel of two dozen experts from the fields of medicine, public health, event management, economics, political science, and the Olympic movement itself (including athletes, coaches, and Olympic Committee participants) to discuss and debate those very questions. Over the next three days the panel will explore virtually every aspect of the challenges facing Brazil, with world-renowned disaster preparedness and emergency response expert Randy Roberson acting as moderator.

Click here to view the proceedings and learn what the panelists think about how Brazil can meet the challenge and pull off a successful 2016 Olympics.

About the Author: Ellen Free

Ellen is an Associate at Maven. She has a diverse background in public relations spanning the consumer technology, high technology, luxury lifestyle, and travel industries. Outside of the office, Ellen is an avid runner, rower, and hiker.